Coming home on Digital and on Movie Anywhere May 29 and on Bluray on June 5th, A Wrinkle in Time.

After the disappearance of her scientist father, three peculiar beings send Meg, her brother, and her friend to space in order to find him.

Disney hired acclaimed director Ava DuVernay to helm with nothing short than a stellar cast like,  Chris Pine, Storm Reod, Oprah Winfrey, Reese Witherspoon and Zach Galifianakis to name a few.  This cast is as talented as they are diverse.

This a film for the entire family.  This is a beautiful, heartfelt and powerful story from the 1962 novel by Madeline L’Engle’s.  It can be challenging bringing a classic novel to life, yet Director Ava DuVernay does it with ease.  If you are concerned about loosing any of this story on a home release from the theatrical, you need not worry.  This is a beautiful release worthy of your time and collection.

The Bluray special features are great from the bloopers to A Journey Through Time.  To see what it takes to bring this story to life is great for all film lovers.  Be sure to order your copy today.

A Wrinkle in Time will be available on Digital and on Movie Anywhere May 29 and on Bluray on June 5th,

Digital = English SDH, Spanish and French (for some platforms)

ABOUT “A WRINKLE IN TIME” CAST AND CREW:

“A Wrinkle in Time” is directed by Emmy® winner and Oscar® and Golden Globe® nominee Ava DuVernay from a screenplay by Oscar winner Jennifer Lee and Jeff Stockwell based upon the beloved novel by Madeleine L’Engle. The film is produced by Jim Whitaker and Catherine Hand with Doug Merrifield and Adam Borba serving as executive producers, and stars two-time Academy Award® nominee Oprah Winfrey as Mrs. Which; Oscar, Golden Globe and Emmy winner Reese Witherspoon as Mrs. Whatsit; Emmy nominee Mindy Kaling as Mrs. Who; Storm Reid as Meg Murry; Levi Miller as Calvin; Deric McCabe as Charles Wallace; Gugu Mbatha-Raw as Mrs. Murry; Michael Peña as Red; with two-time Emmy winner Zach Galifianakis as the Happy Medium and Emmy nominee Chris Pine as Mr. Murry.

Movies Anywhere is a digital movie platform that enables movie fans to discover, access, and watch their favorite digital movies in one place. Movies Anywhere brings together a library of nearly 7,500 digital movies from Sony Pictures, Twentieth Century Fox Film, The Walt Disney Studios (including Disney, Pixar, Marvel Studios and Lucasfilm), Universal Pictures (including DreamWorks and Illumination Entertainment) and Warner Bros., and will continue to expand the consumer experience as more content providers, digital retailers and platforms are added.  By connecting participating digital retailers that include Amazon Prime Video, FandangoNOW, Google Play, iTunes and Vudu, movie fans can now bring together their digital movie collections (whether pruchased or redeemed) in one place and enjoy them from the comfort of their living rooms, and across multiple devices and platforms, including Amazon Fire devices; Android devices and Android TV; Apple TV; Chromecast; iPhone, iPad and iPod touch; Roku® devices and popular browsers. Movie fans can also redeem digital codes found in eligible Blu-ray and DVD disc packages from participating studios and enjoy them through Movies Anywhere. Movies Anywhere – your movies, together at last.

ABOUT THE WALT DISNEY STUDIOS:

For over 90 years, The Walt Disney Studios has been the foundation on which The Walt Disney Company was built. Today, the Studio brings quality movies, music and stage plays to consumers throughout the world. Feature films are released under the following banners: Disney, including Walt Disney Animation Studios and Pixar Animation Studios; Disneynature; Marvel Studios; Lucasfilm; and Touchstone Pictures. The Disney Music Group encompasses the Walt Disney Records and Hollywood Records labels, as well as Disney Music Publishing. The Disney Theatrical Group produces and licenses live events, including Disney on Broadway, Disney On Ice and Disney Live!. 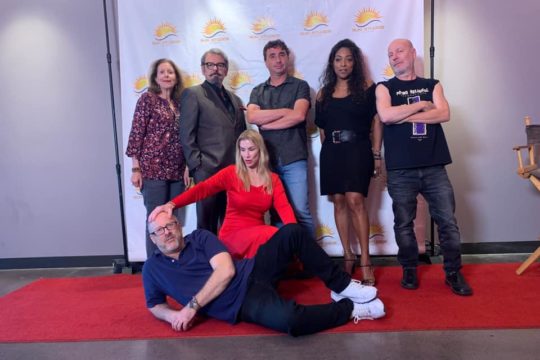